The final mission of the Space Shuttle Endeavour successfully launched on the 16th of May 2011 and ferried the Alpha Magnetic Spectrometer (AMS) cosmic ray detector up to its home on the International Space Station.

AMS is a major $1.5 billion dollar science experiment, the design and construction of which has been one of the largest international collaborations of its kind. The development team consisted of around 600 engineers and scientists from 60 institutions across 16 nations, organized under the auspices of the US Department of Energy.

The experiment will open a new window on the cosmos through the direct detection and observation of cosmic rays. Cosmic rays are high-speed sub-atomic charged particles that are generated in energetic astrophysical processes, such as stellar winds from massive stars, supernova, and black holes. AMS's observations will help to clarify the origins of these particles and our understanding of the processes in which they are formed, as well as probing for hypothetical particles of exotic matter. As with other major new observatories that have explored little-known territory, it may well lead to the discovery of new and unanticipated phenomena. 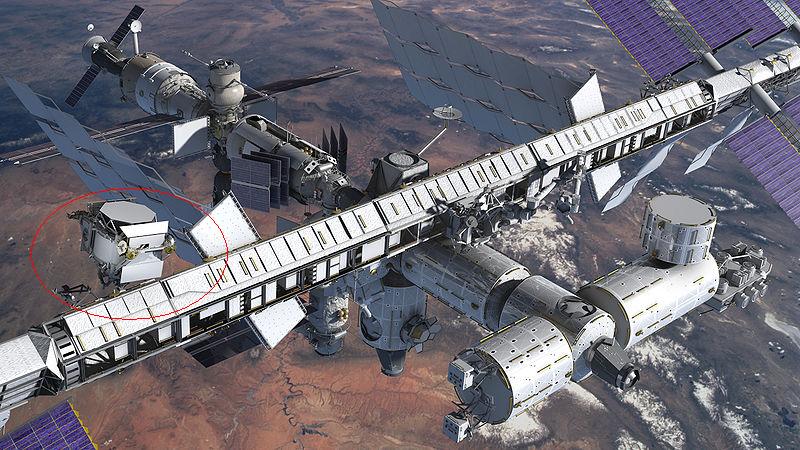 The eCos RTOS is used as the operating system for AMS's critical main data acquisition computer system. This is a four way multiply-redundant PowerPC based design that manages all aspects of the AMS's control and the transmission of its science data into the International Space Station's telemetry system.

Xudong Cai from the Massachusetts Institute for Technology and based at CERN, is the engineer responsible for the main data acquisition computers (MDC) OS and application software. "We evaluated both eCos and Linux for the role of operating system in the MDC. Both systems shared the advantages of open source availability and potential for customization and configuration. eCos however was judged a better fit to the specific requirements for this application. Factors included its small resource footprint, real-time performance and overall simplicity. It turned out to be straightforward to customize and modify to meet our exact needs."

Paul Beskeen, Chairman and Director of Engineering at eCosCentric noted "The team at eCosCentric are excited and proud to see eCos used as a critical component within the Alpha Magnetic Spectrometer, a mission that will help to push the frontiers of mankind's knowledge and understanding of the universe."

The following sections provide a more in-depth insight into the science aims of the AMS and the computer systems that operate it.

Most of our knowledge of the wider universe has been gained from the study of electromagnetic radiation - gamma, x-rays, UV, visible light, IR, microwaves and radio. In contrast to this we have gained relatively little knowledge from high energy particles - the "cosmic rays" that continuously rain down from space.

AMS uses similar technology to earth-bound particle accelerators for its detectors, but instead of generating and accelerating its own particles it simply samples whatever the universe sends its way. Ground based accelerators such as CERN's Large Hadron Collider (LHC) can generate particles in the 7-14TeV energy range, whereas some cosmic rays have been detected that are millions of times more powerful.

The AMS is the most capable cosmic ray detector yet sent into space. Its detectors can determine an individual cosmic ray's mass, velocity, charge and direction. These detections are used to probe for exotic forms of matter including antimatter, dark matter, and strangelets.

When the universe was created in the Big Bang equal amounts of matter and antimatter were created and yet, as far as we are currently aware, the entire universe is matter based. The AMS will be able to detect antimatter nuclei, shedding light on the amount of naturally occurring antimatter and the possibility of antimatter regions in the universe.

We understand that the majority of matter in the universe is in a form that doesn't interact with light, but with a composition that is currently unknown, the so called "dark matter". One of the leading dark matter candidates is a hypothetical particle called a neutralino. If these particles exist its expected that collisions between them will generate positrons. The AMS should be able to detect an excess of positrons over the expected number and help provide the first real evidence for these theories.

On Earth all matter is constructed from up and down quarks (elementary particles that neutrons and protons are built from), but there is a postulated additional form of stable matter that includes strange quarks - "strange matter" or "strangelets". The precursor mission to the AMS made a single detection that was speculated to be of this form of matter. That mission lasted 10 days; the AMS is far more capable and its mission is hoped to last for many years. This should allow enough time to conclusively prove or disprove their existence.

The AMS will also further our knowledge of the overall cosmic ray flux. This will lead to better understanding of the conditions that astronauts will face, and have to be protected from, on interplanetary missions. However, as with most ground-breaking science experiments of this kind, the most exciting discoveries will be the ones we didn't anticipate in advance. 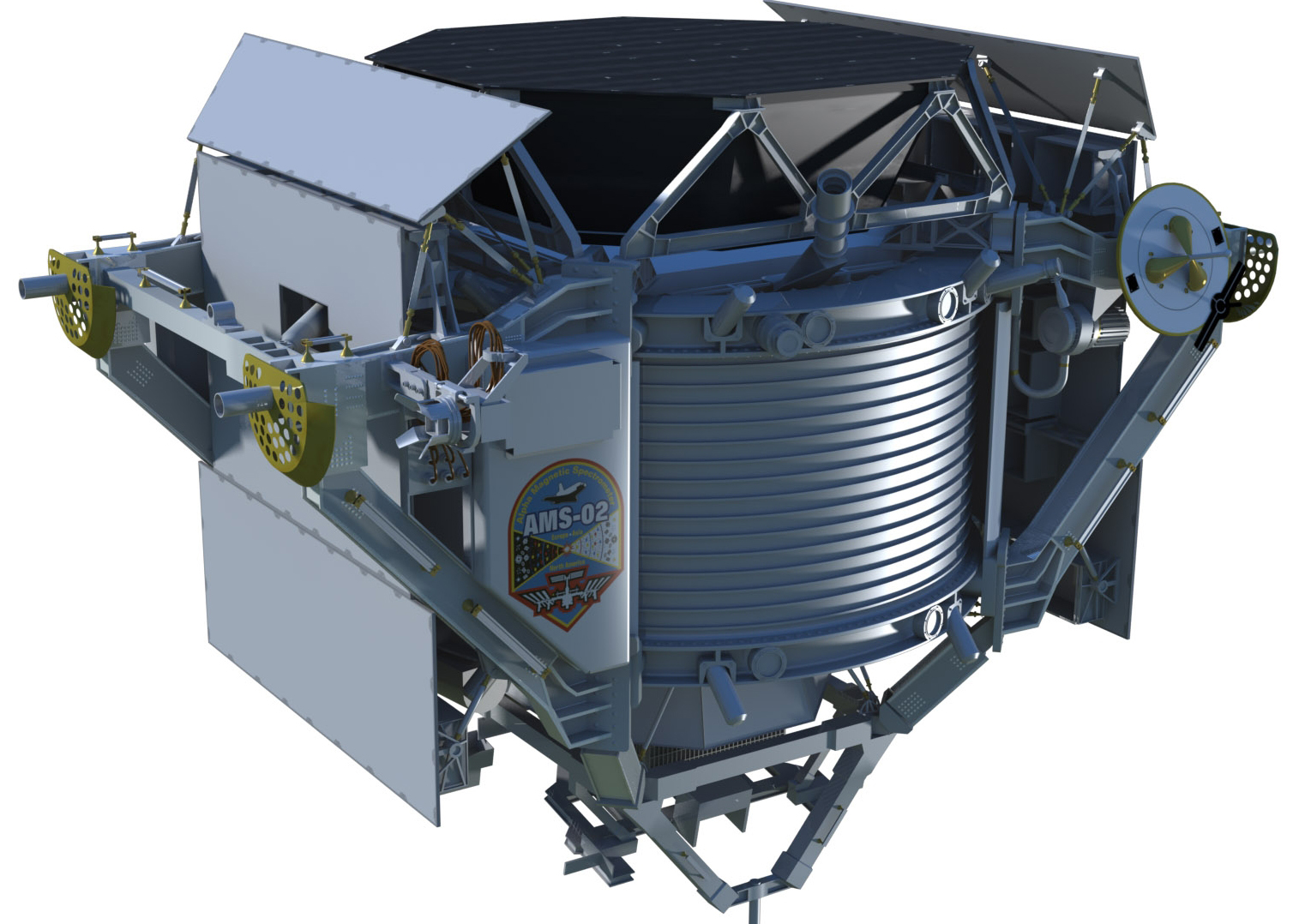 THE INSTRUMENT AND ITS COMPUTER SYSTEMS

The International Space Station (ISS) provides the AMS with all its power, communication and station keeping needs. This allows the AMS hardware design to focus solely on particle detection and processing, without any need to integrate these essential ancillary functions that would otherwise be required for a satellite-based experiment.

It's expected that the AMS will detect around 2000 particles a second. This will generate around 7Gb/s of raw data, which is processed and compressed by the control system down to the 2Mb/s of bandwidth available for ground communications.

The eCos RTOS is used as the operating system for the AMS's four multiply-redundant Main Data acquisition Computers (MDC). The MDCs have the dual roles of data acquisition, and command and control. The data acquisition portion is responsible for the final assembly, processing and selection of the detector event data, along with its buffering and onward transmission into the ISS telemetry system. The data is fed to the MDCs from a tree of around 300 DSPs (known as CDPs and CCDCs). The DSPs pre-process the information, correlating data from various detectors into common detections, throwing out anomalous detections and compressing the data. The MDCs command and control side handles commands from the ground; monitors and controls pumps, valves, power; and manages the magnet. Amongst other housekeeping jobs it also integrates information from the GPS and star trackers that are used to identify where the AMS is pointing at any given time.

MDCs are based around a 400Mhz IBM PowerPC MPC750 with CPC700 northbridge. Main memory consists of 256K of SRAM and 32MB of flash. They also include a radiation hardened 256K boot PROM and an additional 2GB memory for event buffering. Twin CAN buses are used to communicate with system control elements such as the valves and motors as well as star trackers and GPS. The MDCs are housed in a CompactPCI based enclosure called the J-Crate. The J-Crate includes multiple 10Mb/s proprietary AMSWire connections for communications between the MDCs and to the DSP tree. It also houses HRDL (TAXI FDDI) cards for science data communications and MIL-STD-1553 connections for control that feed into the ISS telemetry system. The telemetry system is used to forward the data to the ground via NASA's TRDSS satellite-based communications system.

The detector data processing tree of DSPs is made up of CDP and CDDC modules. Each of these is built around an ADI ADSP-2187L DSP with 128K SRAM and 512K flash. AMSWire links are used to transfer the data up from the CDP modules to multiple CDDC nodes and on to the MDCs, allowing for a high level of redundancy within the processing tree.

There are also 48 USCMs used for a variety of basic control purposes. These units consist of Dallas DS80C390 8051s with twin CAN bus connections.

In all there are thought to be around 600 microprocessors and ASICs involved in the processing & communication of the data, and in command & control of the AMS. 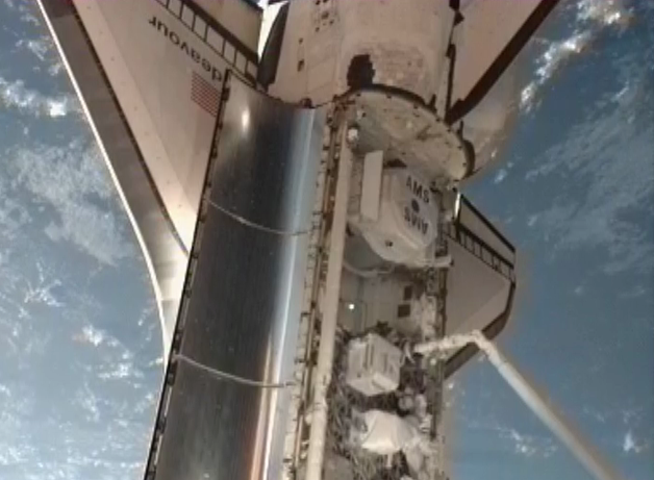 About the Alpha Magnetic Spectrometer

eCos is an open source real-time operating system designed for deeply embedded systems. The system is royalty and product license free and is available for the majority of modern 32bit processor architectures. A mature and reliable technology, eCos has been used in scientific applications including the Alpha Magnetic Spectrometer, control systems for the Tevatron particle accelerator and SALT treaty mandated weapons grade plutonium verification systems. However, it is more commonly found in more down to earth applications such as programmable logic controllers for manufacturing, GPS-based asset tracking systems and point of sale terminals; as well as consumer electronics such as Sirius satellite radio receivers, Samsung LCD TVs and Sony PlayStation3s. See http://www.ecoscentric.com/ecos/examples.shtml for a wider range of example applications.